I still can’t get over just how good of a year 2012 was for movies. It seems unlikely that we’ll have another year like this for quite some time, but that doesn’t mean there aren’t still some films worth looking forward to in 2013. Here are the ten movies I am most excited for in the coming year (note, there are a few other movies that I’m extremely interested in just due to who is involved, but I don’t yet know enough about the films themselves to be excited for them).

I have never particularly been into Kaiju films; this could be due to lack of exposure or due to my general apathy towards Japanese pop culture (I’m the rare breed of geek that is not in love with everything Japanese by default). Whatever the reason, names like Godzilla and King Ghidorah don’t do much to get me excited. That being said, when I watched the first trailer for Pacific RimI got it; I began to understand what people love about these movies. Perhaps it was the massive sense of scale, perhaps it was the cameo appearance of GLaDOS, but it’s most likely the fact that it is being directed by Guillermo del Toro. With Guillermo del Toro at the helm I am confident that this film has a director with both the passion and the skill to make it more than empty spectacle. This is one non-Kaiju fan who will absolutely be seeing Pacific Rim opening weekend.

When I first heard that Pixar was doing a follow-up to Monsters, Inc. I lamented. The original film was fantastic and had a breathtakingly beautiful ending; adding anything else after “Kitty” would have only served to rob the ending of its poignancy. However, when it was revealed that Pixar’s return to Monstropolis would be in the form of a prequel, specifically the story of Mike and Sully’s college days, I started to warm to the idea. Monstropolis is such a rich world full of truly classic characters, and I’m more than happy to return to it so long as it’s done in a way that enhances the original film rather than taking away from it. There are a few things I’m a little leery of; for one, prequels have a long history of being disappointing, often because the films are more focused on being supplemental information to the original story rather than telling a unique story of their own. Also, I’m curious how they’ll handle the fact that the most interesting core idea ofMonsters, Inc. is unavailable, namely the dynamic of monsters being afraid of humans and subsequently learning that humans aren’t dangerous. Either way I’m excited for a return trip to Monstropolis and I’m equally excited to see Pixar riff on the college experience

At a glance this film looks like this year’s model of Tim Burton’s Alice in Wonderland; a new take on a classic story, a beautiful yet strange world filled with bizarre characters, etc. However, there’s one important difference to take into consideration here: Sam Raimi. Sam Raimi, the director of The Evil Dead, Darkman, and the Spider-Man trilogy (i.e. the good Spider-Man movies, not last year’s awful The Amazing Spider-Man), has infinitely more talent than Tim Burton. Both directors have very distinct stylistic trademarks, but Sam Raimi knows how to use that style to enhance the story unlike Tim Burton who, at least recently, merely makes the style the end goal. With Sam Raimi at the helm I have confidence that Oz The Great and Powerful will have a compelling story and great characters at its heart to make the fantastical visuals worth the while. 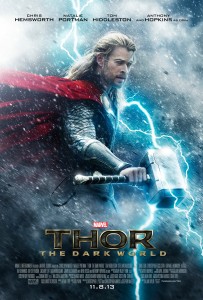 So far we don’t know a whole lot about this one, but really, how much do we need to know? After the success of The Avengers any movie coming out of Marvel Studios is going to be hotly anticipated, and I, for one, am looking forward to see how the events of The Avengers have affected Asgard and what the fate of Loki will be now that he is a captured war criminal. Even at its low points the Marvel Cinematic Universe has still been extremely entertaining, and I fully expect Thor: The Dark World to continue that legacy.

Simon Pegg and Nick Frost reunite with director Edgar Wright for the conclusion of their “Three Flavours Cornetto Trilogy.” How much more do I need to say? Well, since you’re already here I’ll say just a bit more. Again, this is one we don’t know a whole lot about, but what little we do know is enough to be extremely exciting. The World’s End is a science fiction film that is a follow-up to Shaun of the Dead and Hot Fuzz. If that’s not enough to sell you than there’s probably nothing further I can say to convince you. Either way, I’m excited, thus its inclusion on this list.

The popular opinion regarding the Pirates of the Caribbean films is that The Curse of the Black Pearl is good and all the rest of them suck. I respectfully disagree with that opinion, and I think that Dead Man’s Chest and At World’s End are excellent, if flawed, adventure movies. I could talk all day about why I think the Pirates of the Caribbean sequels are grossly underrated (except On Stranger Tides, seriously that one was awful) but that’s not why we’re here. Instead, let’s talk about The Lone Ranger. If I’m being completely honest, the trailers haven’t done a whole lot for me, but I was sold on this movie well before the first trailer came out. The reason: Director Gore Verbinski. Gore Verbinksi was the director of the first three Pirates films, and I believe he is a large part of the reason they succeeded. Verbinski is hugely ambitious, and has a great flair for sweeping scope and stories that are truly epic in every sense of the word. Whether or not you liked the films, there’s no denying that the Pirates trilogy was a hugely ambitious feat of filmmaking, unmatched by anything else in recent memory. Even Rango, which was comparatively a much smaller film, was groundbreaking in its own way, developing new techniques for creating performances in an animated film and featuring stunningly gorgeous visuals from ILM, arguably the top special effects house in the business. The fact that it was also a really good movie didn’t hurt either. The bottom line is Gore Verbinski does not know how to make a small movie, and even if The Lone Ranger fails it’s still likely to be one of the most impressive films of the year. I’m confident, though, that it’ll be another great film from a great filmmaker.

Despite the fact that J.J. Abram’s previous film, Super 8, was kind of a mess, despite the controversy over the fact that the villain in this film may or may not be Khan, and even despite the silly lack of a colon in the title, I am still excited for Star Trek Into Darkness. I’m by no means a hardcore Star Trek geek, but I’ve had my fair share of experience with the Enterprise and her crew. I’ve watched most of the seasons of The Next Generation along with the original series and all 11 films. With that in mind I enjoyed 2009’s Star Trekquite a bit; it was by no means a perfect film, but it was a fun sci-fi adventure that did a great job reintroducing these classic characters and established an exciting new universe of possibilities (yes, for the record, I think the timeline shenanigans were absolutely the right choice for the reboot). I’m hopeful that Star Trek Into Darkness can keep the dynamic that worked well from the last film while improving on some aspects (i.e. now that character introductions and world building are primarily out of the way hopefully we can have a more engaging plot with this one).

Again, in the category of movies David really likes but most people tend to look down on is TRON: Legacy. I have no illusions that it was a perfect film, but it was an extremely fun time at the movies. It took the clever premise of the original TRON, added some interesting new ideas to the world, featured some beautiful design work, a uniquely original score from Daft Punk, and was just in general a fun movie. Despite any flaws I loved every minute of it. Now, director Joseph Kosinski is heading up his second feature film, Oblivion, based on an as-of-yet unpublished graphic novel co-written by himself and Arvid Nelson. The premise of the film is an interesting one: after an alien invasion of Earth left the planet decimated, most of humanity moved to off-world colonies. However, there were still vital resources that could be extracted from Earth and drones were left behind to gather them. Jack Harper (played by Tom Cruise) is a drone repairman and one of the last humans still stationed on Earth. However, when he rescues a woman from a crashed spacecraft events are set in motion that reveal a darker reality than what he has known. I love science fiction and I’m always on the lookout for new and interesting sci-fi stories. I’m hoping Oblivion delivers.

Director Baz Luhrmann (Moulin Rouge!, Romeo + Juliet) has always been a polarizing filmmaker. His movies tend to elicit love-it-or-hate-it responses from audiences (with the exception of Australia which was pretty unanimously “hate it”) and I’ve always been in the “love it” camp (again, excluding Australia which was terrible). Because of this I am fully expecting to love The Great Gatsby. Like everyone else, I read the novel in high school, and while I’m sure there’s a good story in there somewhere, F. Scott Fitzgerald does a great job burying it under endless description. I swear, the man was more concerned with conveying every detail of how the room looked than he was with what the actual characters were doing in it, but I digress. The trailers for this movie basically scream “Baz Luhrmann” and while I know that will turn some people off I couldn’t be happier. I’m only upset that I have to wait until May to see a movie that was supposed to have been released last Christmas.

As I already mentioned with Thor: The Dark World, after The Avengers excitement for the next batch of Marvel Cinematic Universe films is at fever pitch, and from what I’ve seen Iron Man 3 looks like it won’t disappoint. It’ll be great to get another pure Tony Stark story again. Iron Man 2 was still fun, and now, after seeing The Avengers, it works better in retrospect, but it had the unfortunate quality of getting stuck with the brunt of the world-building exposition necessary to tie the elements of Phase One of the Marvel Cinematic Universe together. This time, however, we’ve been promised a story where we can really dive back into Stark’s character and I can’t wait.