My full review for Iron Man Three will be coming shortly, but before I get that posted I wanted to write up a brief article to help prepare you for the best way to enjoy the movie.

Make no mistake, Iron Man Three is a very good movie, but it’s a movie that is very different than most people are expecting. For that reason I suspect that more than a few people will be disappointed because of it. This is a movie that can very much be made or broken depending on the expectations you have going into it. A lot of fans will likely prepare for seeing Iron Man Three by re-watching the first two films as well as The Avengers. I’m here to tell you that this is potentially the worst thing you can do to prepare yourself for this film, because if you go in expecting The Avengers you will be disappointed.

Now let me be perfectly clear: I’m not saying Iron Man Three is inferior to The Avengers, in many ways it’s actually a better constructed film, but Iron Man Three is good for exactly the opposite reason that The Avengers was good. The Avengers was a movie that had some pretty major narrative issues early on in the film, but was able to pave over that with the most potent and well-executed fan service I’ve ever seen in a major studio release as well as having a climax that more than made up for any awkwardness in the beginning. Iron Man Three, though, focusses less on extreme fan service and instead dives into the character and psyche of Tony Stark. It’s also structured in an atypical manner for a major summer release (read: different, not bad) and is filled with a dark, slightly twisted, sense of humor. 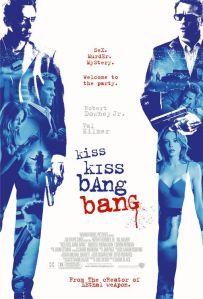 In other words, it’s a Shane Black movie. As such, I recommend an alternate way to prepare for Iron Man Three: go watch Kiss Kiss Bang Bang (Black’s first film and thus far his masterpiece). Though it’s decidedly a different type of film (super hero action vs. comedic thriller) Iron Man Three is tonally much more similar to Kiss Kiss Bang Bang than it is to The Avengers. Kiss Kiss Bang Bang is available for rental through iTunes, Amazon Instant Video, and a few other VOD services and is well worth checking out, not only that but it’s the most effective way I can think of to put you in the right frame of mind to see Iron Man Three.

I wholeheartedly recommend Iron Man Three, but you just need to be aware that it’s probably not the movie you expect. With that in mind you can love it for what it is, not what you thought it would be.

One thought on “READ BEFORE SEEING IRON MAN THREE”