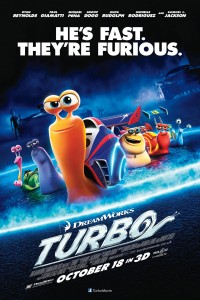 In the past, I’ve briefly touched on my theory that nearly every year since 2008* DreamWorks Animation has had a pretty consistent streak of one good movie and one bad movie. 2008 had Kung Fu Panda and then it had Madagascar: Escape 2 Africa, 2010 had How to Train Your Dragon and then there was Shrek Forever After, 2011 had Kung Fu Panda 2 and Puss in Boots, and 2012 gave us Rise of the Guardians along with Madagascar 3. Earlier this year DreamWorks released The Croods, which had just enough heart and Chris Sanders charm to be enjoyable, but not enough to completely overcome the stupidity that crept in around the edges. Despite the fact that The Croods was disappointing, at the time I was worried that it would end up being DreamWorks Animation’s “good” movie for the year. As it turns out, I was sadly right.

Their newest film, Turbo, tells the story of Theo, a garden snail who dreams of being fast. After a series of mishaps involving being immersed in nitrous oxide, Theo obtains superpowers including the ability to move at speeds upwards of 200 miles per hour. After another series of mishaps, Theo and his brother Chet end up being captured by Tito, the co-owner of a taco stand and brought to a down-on-its-luck strip mall where the shop owners have a collection of “racing snails.” When Tito learns of Theo’s powers, he believes he can use it as an attraction to bring more guests to the strip mall. Tito eventually ends up entering Theo in the Indianapolis 500 where both of them attempt to fulfill their dreams.

The best way I can describe Turbo is that it’s essentially Pixar’s Cars but completely lacking a heart. Both movies hit similar beats, have similar characters, and use similar plot devices. Both films are centered around racing; Cars has Radiator Springs while Turbo has Starlight Plaza; Cars has country music, Turbo has rap; Cars has Larry the Cable Guy, Turbo has Snoop Dogg.

Say what you will about Cars, but at least it was a legitimate passion project for John Lasseter. Lasseter has always been a car person, and was inspired to make the film while on a cross-country road trip with his family. Cars isn’t a great film – it struggles to create fully realized characters on top of having an overly familiar story – but at least the people who made the movie cared about it, imbuing the film with a sincerity that helps to elevate it beyond its mediocre trappings. Turbo has no such sincerity. Writer/director David Soren supposedly drew inspiration for this story from watching his son play with toy cars and observing garden snails in his yard, but regardless of the source of the idea, the finished product feels incredibly cold and artificial.

You see, Turbo tries REALLY hard to have a heart, but it’s all fake. The movie tries to get the audience invested in the story of the ambitious Theo and his cautionary brother Chet; it tries to make you sympathetic towards Tito’s foolishly extravagant ideas, but it’s all completely hollow.  There’s not a tangible reason that all of this fails to connect – to the film’s credit it does take time to develop its characters and central conflict – but on an intangible level the film lacks sincerity. Heart and sincerity are concepts that are next-to-impossible to quantify, yet they’re qualities that an audience will inherently respond to. Turbo is utterly lacking in these qualities, all the while putting up a facade to give the impression of them. I’m awfully conflicted here, because this seems to be a clear effort from DreamWorks to give their films a greater depth and achieve a resonance that helped make movies like How to Train Your Dragon and Kung Fu Panda such rousing successes, but it doesn’t really do anyone any good when they fake it. Is a forced sentimentality any better than tired pop-culture references and thinly veiled innuendos**? It’s like the kid in class who used to draw butts on his test is now realizing his failing grade and begins to cheat off the smart kid next to him. Sure, it’s good that he actually cares now, but the end result isn’t much better.

In addition, the structure of the story is broken. In broad strokes the whole thing is painfully paint-by-numbers, yet in the details it fails at some basic aspects of storytelling 101. You may have noticed that earlier, when describing the story, I repeatedly used the phrase “after a series of mishaps.” I wasn’t just trying to breeze through the synopsis; this is actually reflective of how the story is told. I’ve mentioned before how you ideally want the story beats of your film to be connected by either a “therefore” or a “but” rather than an “and then,” well Turbo is most definitely an “and then” story. Theo is reflecting on his life and his seeming insignificance AND THEN a gust of wind blows him onto the freeway where he gets sucked into the engine of a street racing car. Theo is testing out his new powers by taunting the kid on a tricycle AND THEN a bird picks up Chet and carries him off to the strip mall where Tito’s taco stand is.

The film also struggles with finding a focal point for the story. In concept, this is Theo’s story of overcoming adversity to live up to his dreams, but the film dedicates significant chunks of time to the shop owners of the Starlight Plaza strip mall, specifically Tito. Finding the right point of view for a story is sometimes a tricky thing, and it’s obvious that filmmakers here thought they could pull off the multiple points of view by making Theo and Tito’s stories a reflection of each other, but it never quite works. Tito’s quest to revitalize Starlight Plaza always feels like the B-story and significantly less pertinent than the story of Theo, Chet, and even the gang of racing snails. Here it would have been better to restrict the point of view primarily to Theo – perhaps with the occasional aside given to Chet – while leaving the story of the shop owners in the background.

The few good things that I can say about Turbo are all fairly underwhelming. The voice cast is mostly fine; Ryan Reynolds and Paul Giamatti are both decent as Theo and Chet respectively, though neither turn in particularly memorable performances. The rest of the voice cast range from forgettably serviceable to mildly annoying, though nothing comes close to the sheer badness of the voice cast from Epic. The animation is as well done as you would expect from one of the major animation studios, but it’s not breaking any new ground for the medium***.

This isn’t a movie that is violently terrible, but rather one that is simply half-hearted and at least somewhat broken on just about every level. It’s an unrewarding bore of a movie that is derivative, soulless, and undeserving of your time.

*2009 is excluded from this theory because they only released one movie that year, and it was terrible.

**Which, by the way, still exist in Turbo, just in a lesser number than is typical of DreamWorks.

***We’ve reached the point where extraordinary animation has become ordinary. I’m not offering any commentary on that, just pointing it out.