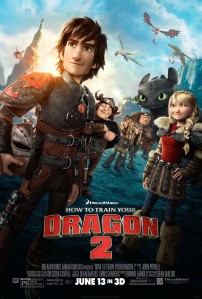 In our current movie climate, the automatic response to a movie doing well financially is for the studio to immediately begin work on a sequel, whether or not there’s any creative reason to do so. For god’s sake, a Spring Breakers sequel is in development right now, and even the original’s biggest star rallying against it is doing little to deter its progress.

How To Train Your Dragon – one of my favorite movies of the last five years, and probably the best non-Pixar animated film since The Iron Giant – is one such movie with no narrative reason to come back for another installment. The film features near-flawless narrative construction, and more to the point it is a fully self-contained story. There are no lingering questions or loose threads that leave open doors for future stories; it is an absolutely beautiful, singular film. So, of course, DreamWorks quickly announced multiple sequels for it.

And you know what, somehow they actually managed to pull off something pretty great.

How To Train Your Dragon 2 is set roughly five years after the previous film, and things are much as we left them five years ago. The humans and the dragons are still getting along swimmingly, and Berk generally seems like a pretty great place to be. Hiccup spends his time honing his flying skills with Toothless, and mapping out the lands that surround Berk, all while his father grooms him to take over as chief of the village. However, on one of Hiccup’s scouting expeditions he comes across a group of dragon trappers who are working to raise an army of dragons for the mysterious Drago Bludvist.

I’ll be upfront and say that How To Train Your Dragon 2 is not as good as the first. The first movie, as I mentioned, was just about perfect in the construction of its story and narrative, telling a simple story tremendously well. This new film creates a bigger canvas for itself and in the process loses some of that simple perfection. There are a lot more plot elements moving simultaneously in this film, and at times it struggles to keep track of them all. At one point the film transitions from a scene where a group of characters have just been taken hostage to a scene where another group is effectively standing around talking. Both scenes are solid on their own, but the way they are juxtaposed against each other brings the pacing of the movie to a grinding halt. It often feels like there’s more plot than the movie can handle, and it would have likely benefitted from simplifying and combining a few of the major story beats. Again, most of what’s happening is solid, but it starts to overwhelm the movie at times, and even takes its toll on some story beats that might have been more effective if they had been given some more room to breathe.

The characters, on the other hand, are absolutely How To Train Your Dragon 2’s greatest asset and the film knows it. It’s such a joy getting to reunite with these characters, and the movie goes out of its way to let us just hang out with them. The moments when the movie slows down and allows us to live in this world with these characters – to share in their joys, their fears, and their sorrows – are absolutely pitch-perfect. There’s a scene very early in the film in which we see Hiccup and Toothless flying together, and it feels like being reunited with old friends. I have been fond of How To Train Your Dragon since it was released, but I don’t think I realized how truly in love with these characters I was until seeing this new film. The decision to age the characters in roughly real time was a wise one, and it allows the characters to be familiar without feeling like they’ve been static for these past few years. It also doesn’t hurt that the vocal performances are (mostly) strong, and the character animation on display is perhaps the best DreamWorks has ever done. There’s magic in these characters that simply doesn’t exist in any other work the studio has done, even the supporting characters like Fishlegs, Snotlout, Ruffnut, and Tuffnut are charming in their own ways. The sole exception here is Astrid. America Ferrera’s vocal performance feels absolutely phoned in this time around, and I can’t help but wonder if it’s due to the fact that her character has significantly less to do in this movie. It’s a shame because she was one of the best characters in the first movie, and her presence in this one ends up being disappointing. Regardless, the majority of the character work in this movie is positively spot-on, and any trepidation I had about Sanders and DeBlois being split up on this project turned out to be unwarranted when it comes to the film’s characters.

That said, while the character work did not suffer at all from the separation of the directors, the action, sadly, did. The action sequences in this movie, while mostly serviceable, are not as strongly directed as those in previous Sanders/DeBlois films. Geography of the action is less clearly conveyed, and the action itself feels much more stilted. While previous films like Lilo & Stitch and the first How To Train Your Dragon successfully integrated character beats into the action, here the two never quite mix. Character beats happen in the same setting as action sequences, but each element feels somewhat separate from the other – dragons are fighting on one side of a battlefield while characters are engaging the villain in dialogue on the other. In these types of co-director relationships, it’s really hard to attribute skills to different directors from the outside looking in, and often the interaction of the two partners creates something that is better than what each individual could accomplish, but looking at their previous works, and the superior action work in Sanders’ otherwise inferior The Croods, leads me to believe that directing action may not be DeBlois’ forte in the same way that character work is.

I’m interested to see how I react to this movie on repeat viewings, because right now I can see it going one of two ways. Either the elements of the movie that I disliked will begin to bother me more over time and hurt my enjoyment of the film, or I’ll come to appreciate more the aspects of the film that I already love while overlooking the more negative parts of it. Upon a first viewing, though, I can say that I enjoyed this movie a whole lot. It’s most definitely imperfect, but its imperfections tend to be far less memorable than the things it gets right, and there are many things this film gets absolutely right. If the original How To Train Your Dragon was close to perfect, than How To Train Your Dragon 2 is inferior in that it is only very, very good. It may not be Toy Story 2, but for a movie that had no reason to be made, this does a really great job justifying its existence.

2 thoughts on “Movie Review – HOW TO TRAIN YOUR DRAGON 2”