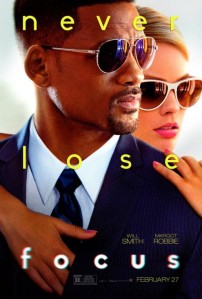 Hey, remember that time when Will Smith wasn’t completely insufferable?

Look, I don’t much care about how celebrities behave (or misbehave) in their real lives. If I took it personally every time I found out someone in Hollywood is a pompous, arrogant jerk I’d have a really hard time being a movie fan. Normally I’m pretty good about separating someone’s on screen work from their “real life” persona, but in the case of Will Smith, that divide is so thin as to be almost non-existent.

You can use The LEGO Movie’s prophecy concerning the special to describe essentially every role Smith has played in the past decade, and you get the sense that he really does believe himself to be the greatest, most interesting, most important person of all time.

But I suppose we should talk about his latest movie, Focus. Focus is about the greatest, most interesting, most important con man of all time, who runs a massive, but highly efficient team of petty crooks to make millions of dollars off of stollen cash, jewelry, and identities. He comes across a stunningly beautiful con lady who tries to steal from him, but because he’s the greatest, most interesting, most important con man of all time, he sees through her in an instant, leading her to drop everything and pine for his affection like a lost puppy. After that he goes on to get everything he wants and prove that he’s smarter than everyone else in the world. The end. That’s it, that’s literally the whole movie; there’s no interesting angle, no real obstacles to overcome, just Will Smith smirking his way through the film’s oppressive 104 running time constantly explaining how much smarter he is than everyone else.

That’s the movie’s fatal flaw, as much as I dislike Smith, there’s an interesting movie to be made here. Heist movies are fun – it’s fun to watch charismatic criminals beat the odds and prove that they’re the smartest one in the room – but in order for it to work, there needs to be real odds for them to beat. There are none here. Smith doesn’t have a character flaw that threatens to muck things up, he never gets in over his head, he’s never made, he never even lets his affections for Margot Robbie’s Jess get in the way of his criminal work. The movie teases that each of these things might be a factor, only to immediately say, “lol jk this was part of the plan all along, Will Smith is too awesome to have flaws.” And you know, that makes for a really dull movie, every time you think, “hey, this might finally be getting interesting,” the film jettisons all of its potential drama. By the third time this happens with half the running time left to go, you realize the movie isn’t interested in telling a compelling story, it’s just another vehicle for Will Smith to show how “awesome” he is.

I’m putting a lot of emphasis on the star here, which normally isn’t something I do, but it’s hard to avoid in this case because there’s no purpose to this film beyond showing that Will Smith’s character is this incredible, superhuman figure who can do no wrong. It bends over backwards to avoid having any kind of dramatic stakes or narrative arcs or human emotion. The entire point is, “look at how cool this guy is! He’s cooler than everyone, even you!”

It’s frustrating because the film constantly threatens to be about something more. At one point it threatens to be about this great con man who is undermined by a gambling problem, at another point it looks like it might be about this steely criminal being transformed by the power of love, at yet another it looks like maybe it’s a revenge story about a scorned apprentice who has come back to outsmart their teacher. Sure, all of these stories have been done a thousand times before, but they’ve been done so many times because they feature classical storytelling. Instead, Focus introduces the potential for these other stories as misdirection in a misguided twist – the twist being that the film never intends to raise the stakes or have an arc, it’s just going to be variations on the same thing we saw in the first ten minutes of the film.

Look, I realize that not all films need to, or even necessarily should conform to classical storytelling methods. I love it when a movie flies in the face of what we expect to achieve a greater point or challenge the audience in interesting ways. Focus doesn’t do that. It doesn’t criticize the success of its protagonist like The Wolf of Wall Street or create a terrifying metaphor for the cold brutality of unchecked capitalism like Nightcrawler; as far as I can tell, the entire point is nothing more than highlighting how “awesome” Will Smith’s character is. If someone else can find greater meaning in this film’s ardent refusal to have any kind of dramatic stakes, I’d be more than happy to hear it, but if it’s there, I couldn’t see it.