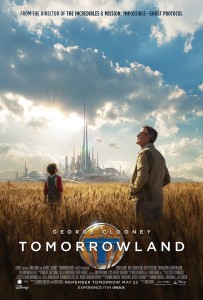 Thanks to the spread of information through the Internet, what was once a unique interpretation of a film has grown into a nearly axiomatic statement. Brad Bird’s The Incredibles espouses objectivist ideals, or at least that’s what the prevailing wisdom suggests. Myself, I’m not so sure. The film unquestionably deals with objectivist themes, but it has a more complicated relationship with them than most people acknowledge. The simple fact that it’s a movie about super heroes, people with great talents altruistically using those gifts to help people, stands in direct defiance with Ayn Rand’s despicable ideal of allowing extraordinary people to benefit themselves free from the bureaucracy of governments or the needs of the mundane. It’s also specifically about one extraordinary man’s journey to learn that he, as skilled as he is, still needs help from others – learning that we’re stronger when we support each other. On the same token, though, the villain’s master plan involves giving superhuman abilities to the masses, thereby making the extraordinary mundane, in other words the height of villainy from a Randian point of view. It’s a film that neither fully endorses nor fully rejects objectivism, and it ends up feeling thematically confused.

And The Incredibles isn’t even half as confused as Tomorrowland is.

Tomorrowland tells the story of a young optimist named Casey (Britt Robertson). As a child, Casey would look up at the stars and dream of endless possibilities, but she now finds herself in a present where the world can’t afford to look toward the stars when there are so many horrible, impossible problems here on Earth. She’s told every day that she’s living in dystopia, but she just wants to know how to fix it. After being arrested for trying to halt the demolition of NASA’s launch facilities, she finds in her possession a pin that, when touched, gives her a glimpse of a beautiful futuristic society. Her search to find out what this place is leads her to the home of Frank Walker (George Clooney), a reclusive inventor who was invited to Tomorrowland as a child, but was exiled after he created… something.

This is a heartbreaking movie for me because it starts with so much promise. The early scenes where we’re introduced to Frank and Casey are really something special. For fans of Disney history, there’s a romantic glow around the idea of the 1964 World’s Fair, and this film really harnesses that – a tribute to science, technology, art, and the beauty of our diverse cultural heritages. The reality was almost certainly more mundane, but the recreation of the fair in this movie embraces the idealized version as a symbol of progressive optimism. It also uses the fair as a lead in to the movie’s namesake, its own attempted tribute to progressive optimism.

The same is true of our introduction to Casey. She’s a character who refuses to be deterred by the seemingly hopeless state of the world, and that almost naive optimism represents the heart of what this film aims to say. It is able to introduce big, silly, weird ideas like robots and ray guns and bathtub rockets without breaking the spell of the film because Bird and company have such a strong handle on the film’s tone at this point. It’s bright and colorful and fun, and even as there is an ominous threat creeping in, much like Casey, the film’s spirit will not be deterred.

All told, the first hour of the movie is pretty solid, but it’s not without it’s problems. Most notably, Damon Lindelof brings the “mystery box” method of storytelling over from Bad Robot. The movie takes forever to tell you what exactly the objective and the stakes at play are, and it endlessly teases at a reveal for no good reason whatsoever. It’s almost a signature for Bad Robot and adjacent projects at this point – a reveal that serves no purpose other than the desire to have a reveal. It doesn’t help matters that it’s painfully obvious what the reveal is going to be, so you’re just waiting around for the movie to catch up with you. It’s the completely useless obfuscation over Khan in Star Trek Into Darkness all over again.

There’s also an action scene early on that takes place in a store filled with geek ephemera that’s embarrassingly bad. Bird, who has shown us he knows how to shoot action in both animation and live action, gives us a fight scene that’s totally incoherent. Not to mention the fact that it’s stuffed to the gills with groan worthy Star Wars product placement.

In the scheme of things, though, those problems aren’t enough to sink the movie. In fact there’s a lot going on in the first half that’s worthwhile. Once our heroes get to Tomorrowland, though, things take a turn for the worse. This is when the movie finally decides to let us in on the plot, and the plot seems to run contrary to the last hour of the movie we’ve already seen. This is a classic Damon Lindelof blunder, he spends all this time introducing us to great characters and setting up this big mystery, but then when the mystery is finally revealed it seems weirdly out of place. In this case specifically it’s not what the mystery is that’s a problem, but rather where the movie goes with it.

This is the part of the review where I, unfortunately, have to get into spoilers to discuss the movie properly. Not just the dumb mystery box stuff that I have no qualms with spoiling, but also real, legitimate, final act twists and the conclusion of the movie itself. The problem is that the movie’s fatal flaws all come with the thematic statements made by its ending, and there’s no way to talk about this movie without discussing these issues. So, if you want to avoid spoilers, skip down to the last paragraph.

I’ve mentioned that over the whole first half of the movie there’s the lingering mystery of what went wrong in Tomorrowland. We’re shown a vision of Tomorrowland as a thriving utopia, we’ve heard the sales pitch (which is straight out of Atlas Shrugged, albeit with a more charitable name for mundane people than “parasites”), but we know that something happened to threaten that idea. That something is the invention of a machine that could predict the end of the world, and the prediction has marked the world’s expiration date as being less than two months away. As an idea this works because it gels with the themes of the first half of the film. Things are bad in the world and Casey desperately wants to fix them and she’s not willing to accept that the future has already been written. It also works as a criticism of objectivist ideals because the people of Tomorrowland could save humanity, but refuse to do so because they don’t want normal people messing up their city. The problem comes with an almost instantaneous second twist where we find out the machine is actually broadcasting hopelessness to the people of Earth, thereby creating a ouroboros self-fulfilling prophecy. Further, we learn that David Nix (Hugh Laurie), the guy running the machine in Frank Walker’s absence, was deliberately using its broadcasting capabilities to warn people of their eminent demise, but rather than do anything about it, they just resigned themselves to their fate. Casey and Frank decide they need to blow up the machine to save the world and Nix tries to stop them (because he’s the bad guy and he has to, even if there’s not a clear reason why he’d want to). They blow up the machine and stop the apocalypse and the film ends with Frank and Casey sending out androids to recruit more special people to come to Tomorrowland, but this time with the qualification that they must be optimists.

This is all so crazy to me. All the pieces are set up from the very beginning for how this should end, but then they go and do something totally different that not only conflicts with ideas established earlier in the film, but also doubles down on Brad Bird’s weird relationship with objectivism. The right ending of this movie is Casey using the machine to broadcast her optimism to the world to counteract what Nix had been broadcasting. To show people how the world can be and inspire them to work toward making it better. The machine itself is a thinly veiled criticism of media that thrives on despair, but instead of arguing that we should make media that inspires people, it decides to blow the whole thing up. Casey even expresses this idea almost verbatim and then the movie doesn’t follow through! I don’t understand it! Everything makes so much more sense if the final conflict revolves around the conflict between Casey wanting to share Tomorrowland with the world and the old guard wanting to keep it a secret, even if that means destroying the world in the process. It would give Nix a real motivation to be a bad guy instead of fighting for the Earth’s extinction for no good reason. Instead of breaking down the walls of the walled city to present a beacon of optimism to people, the movie keeps the city walled, but changes its leadership. The entire movie is building to a refutation of objectivism, but then stops dead at the last second and says “objectivism is okay as long as the special people are all optimists.”

This also means the movie runs counter to Walt Disney’s view of futurism the film claims to be a tribute to. Disney wanted to change the world by example, to use his money and influence to showcase new ideas and new technologies that could create a better way of life. Disney’s plan for a city of the future was not some objectivist kingdom for special people to escape from the world, but rather a public monument that he hoped would be a model upon which others could build.

Tomorrowland is a movie overflowing with potential, which makes it all the more devastating when it utterly fails to live up to it. It’s a movie with interesting ideas and hopeful intent crushed under Lindelof’s flawed narrative devices and Bird’s weird, non-committal relationship with Ayn Rand. The movie claims to espouse optimism, but ends up being weirdly cynical. It tries to offer a great big beautiful tomorrow for audiences to rally behind, but in the ends reveals that tomorrow is by invite only.