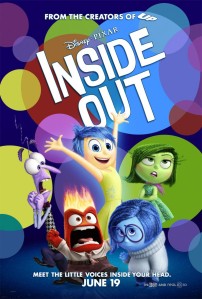 The past few years have been rough for Pixar. They went from being the studio that was  seemingly invincible after 15 years and 11 excellent films to the studio that made Cars 2. In fairness, Pixar has only released three films over the last few years and two of them were pretty okay, but when you combine the notable drop in quality with the promise of tripling their sequel output, things seemed pretty bleak.

That’s why it’s so heartening that Inside Out is a near-perfect masterpiece in the tradition of Pixar’s very best films.

Inside Out tells the story of Riley, an eleven-year-old girl who loves hockey and goofing off and spending time with her family and friends in Minnesota. Riley has a happy life, thanks in no small part to Joy, the very first emotion that showed up in Riley’s head after she was born. Joy pretty much runs the show from HQ inside Riley’s mind where she works alongside Fear, Anger, and Disgust to make sure that Riley is a happy, healthy, well-adjusted girl. And then there’s Sadness. Sadness was the second arrival in HQ, and right from the start she and Joy have never quite seen eye-to-eye. While Joy knows how to manage Anger, Fear, and Disgust, she hasn’t ever figured out just what to do with Sadness, and mostly just tries her best to keep her out of the way. Things get hectic, though, when Riley and her family move to San Francisco – a place with weird pizza, no ponds for skating, and a boring, grey house. Joy tries to make the best of the situation and keep Riley smiling, but Sadness keeps getting in the way turning Riley’s once-joyful memories melancholy and blue. Worse still, while Joy attempts to restore one of these memories, Sadness takes the control panel and inadvertently creates a new core memory for Riley. Core memories are what power your islands of personality and make you who you are, and for the first time ever, Riley has a sad core memory. As Joy tries to flush this new sad memory from the system, she is dumped along with Sadness and the rest of the core memories into Riley’s long-term memory storage. Without the core memories in place, Riley’s islands of personality begin to collapse and Joy and Sadness must find a way to return to HQ before Riley’s personality is lost forever.

Inside Out is one of those movies that’s intimidating to write about. It’s very easy to take a movie that works on some levels and fails on others and break it down to examine how it functions. It’s much harder to take a film that is fundamentally perfect and adequately explain why it’s so good. This is a movie that is profoundly meaningful and deeply complex while still being totally accessible and effortlessly watchable. It’s one of the best cinematic examinations of the complicated nature of human emotions and depression and also a fun, humorous children’s film. This is the kind of stuff we used to praise Pixar for being so good at, and it’s so exciting to see one of these again.

It’s especially impressive here because making a compelling film about depression is an incredibly difficult thing to accomplish. Depression is something that is just inherently uncinematic. Film is all about movement (which is why we call them “movies”), but depression is static, it’s total resignation – the feeling that there’s nothing you can possibly do to make things better so why even bother trying? Even a tremendous film like Melancholia isn’t something that’s exactly an easy watch. The fact that they made a kids’ movie about depression, and that it actually manages to be incredibly honest and profound is mind-boggling. What makes it work is the way the movie takes the internal struggle with depression and gives it names and faces. Having the living personifications of Joy, Sadness, Anger, Fear, and Disgust is something you can only get away with in a cartoon, and it’s what ultimately drives this film’s success. We catch the highlights of what’s going on with Riley in the “real” world, but the movie knows that the most interesting element of depression is the internal struggle. The movie makes literal the struggle of Joy trying to find her way back, but never seeming to reclaim any ground. Every time it seems like Joy is making some progress, something goes wrong, and Riley is no better off, in fact sometimes things are even worse.

The other thing that makes this movie’s depiction of depression so smart is that it very explicitly makes the point that depression and sadness are not the same thing. For many people, the two words are interchangeable. When someone is bummed out about something, they’ll casually say “I’m depressed,” but depression, real depression, is not sadness. Sadness is an important, healthy, necessary emotion and it can even be cathartic and beautiful. In the context of the film, Joy has learned to manage the other emotions, and let them work at appropriate times, but she’s always repressed Sadness, desperately tried to keep her out of the way, and even contemplated ways to get rid of her. When Sadness does take control, Joy has no idea how to cope with it and it sends Riley’s whole system into chaos. Happiness, the film says, is not found by suppressing sadness, but by having a healthy relationship with it.

There’s so much thematic meat in this movie that I could just go on and on talking about it, but I’m worried I may have already said too much. What’s important to note, though, is that this isn’t some dour treatise on depression, but instead is able to say all of these things while playing to the wealth of human emotion. The film is frequently hilarious and often joyful even as it raises the stakes to terrifying levels. This is due in no small part to the excellent group of comedians voicing Riley’s emotions. If the choice to cast Amy Poehler as Joy, Phyllis Smith as Sadness, Mindy Kaling as Disgust, and Lewis Black as Anger seems obvious, it’s only because it’s pitch perfect casting. Each gets a slew of great comedy beats, but they also all work as fully real characters who are compelling for more than just comic relief. You really feel that all of these characters care deeply about Riley and only want what’s best for her, even if they sometimes take the wrong approach due to their own idiosyncrasies. There’s no villain here, no one trying to sabotage the operation, just people genuinely trying to the right thing.

In the grand tradition of Pixar films, Inside Out is both visually stunning (there were more than a few times where I was blown away by the framing of a particular shot) and narratively resonant. It’s a film that pays off on its concept by playing to the whole range of human emotion while also being a deeply meaningful story about an idea that too many people still fail to fully understand. I would love to view this as a triumphant return to form for Pixar, but the four sequels we have on the horizon give me pause. Still, there’s no denying that Inside Out is a fantastic film, and at least for now, it’s so good to see Pixar doing one of these right again.

One thought on “Movie Review – INSIDE OUT”