On Friday, November 17, 1978, at 8 o’clock p.m., The Star Wars Holiday Special was broadcast for the first and only time on CBS. In the forty years since, it has become something of a contemporary myth; a bizarre, misguided, mistake that many knew about but few outside of its initial 13 million viewers had actually witnessed. These days it’s not actually that difficult to find. Though never officially released, the thing is widely available on file sharing services and YouTube. Even Lucasfilm itself has been known to occasionally acknowledge the infamous special with a wink and a nod. Gone are the days when you had to buy it on a crummy VHS bootleg from some guy at a comic book convention, and so it seems unnecessary to regale you with tales of Harvey Korman in drag as a four-armed, green-skinned space version of Julia Child, or of Chewbacca’s cartoonishly ancient father, Itchy, getting all hot and bothered over approved-for-broadcast-television virtual reality porn.

That stuff is all there, and it’s all amazing, but that ground has been well trodden. Instead, for the fortieth anniversary of this storied trash masterpiece, I want to take a different approach. I want to peel back the surface level silliness of a two-hour TV special where at least sixty percent of the spoken dialogue is in un-subtitled Shyriiwook and really look at the heart of this bizarre, malformed marriage of George Lucas’ postmodern opus with the last gasp of the corporate-sponsored, network television variety show.

When it comes to Christmas specials, stories about loved ones struggling to make it home in time to spend the holiday with their families is one of the most common go-to tropes. It’s a trope that’s so common because it works. It’s an instantly understandable way to establish stakes that can also evaporate completely once the obstacle is overcome. Your average TV special doesn’t have the same sort of melancholic ambitions of a film like It’s a Wonderful Life; it’s a cozy blanket designed to warm your heart and make you feel good. It doesn’t have to put you through the wringer in order to justify its sentimental sweetness, and – in fact – that would work against the advertisers’ goals of getting some of that cozy warmness to rub off on their brand image by sheer proximity. Suitably, this is the plot that The Star Wars Holiday Special chooses to employ, with Chewbacca fighting against forces outside his control in an attempt to get back to Kashyyyk and reunite with his father; his wife, Malla; and his son, Lumpy to celebrate Life Day. And what low-stakes obstacle is it that Chewie has to overcome in this heartwarming holiday tale? 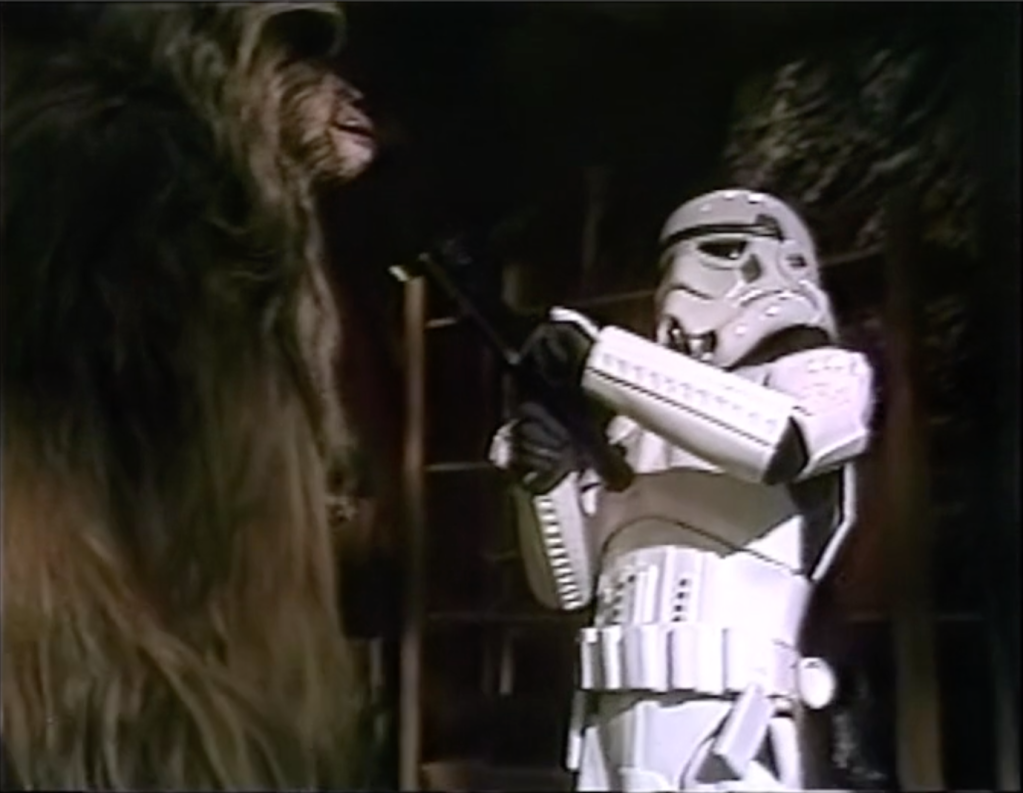 For as fast and loose as this special plays with the then-fledgling Star Wars canon, it’s remarkably faithful in presenting the dystopic state of the galaxy during that era. This can be easy to forget after it became the most moneymaking movie of all time, but as much as anything else, Star Wars is an anti-Vietnam War protest film, casting the totalitarian might of the Galactic Empire as a metaphor for Nixonian America. The problem is that this metaphor is wildly at odds with the intended purpose of a General Motors-sponsored TV special, airing the weekend before Thanksgiving, meant to encourage viewers to go out and spend money during the Christmas season and so boost the economy after the recent recession. The result feels like something out of a satire. Stormtroopers kick in the Wookiee family’s door searching for any ties to the Rebellion and issuing thinly veiled threats, but then members of the Imperial Gestapo sit down with the Wookiees to watch an extended comedy sketch starring Bea Arthur and a music video for Jefferson Starship. It’s like Christmastime in the Third Reich, and it’s wild.

Even though George Lucas wasn’t directly involved with the Holiday Special and his name is absent from the credits, the whole Wookiee storyline (including the decision to have them speak entirely in untranslated grunts and growls) was reportedly his idea. It’s an idea that is distinctly Lucasian in its strangeness and who knows how it would have turned out if he has been a more active participant in this project, but it’s clear that Fox Television and the small army of writers they hired to make sense of it had no idea how to adapt that bizarre pitch to the format of a two-hour Christmas program. The result are these extreme tonal shifts and insane non sequiturs, a lot of which end of having a meanness to them that would feel out of place in any piece of children’s programming, but especially so in a holiday episode. Stormtroopers ransack Lumpy’s bedroom, destroying his toys, and sneering at his devastation. There’s a drawn out sequence where we watch an instructional video hosted by Harvey Korman playing an old model android who is slowly and apparently painfully deteriorating over the length of it. Even in the cameos by the main Star Wars characters, Luke and Leia are weirdly curt and dismissive of Malla’s concerns.

The whole thing resolves with Lumpy faking a broadcast summoning the troopers back to the local Imperial outpost before killing off the one soldier they left behind (how many other Christmas specials end with violent acts of self defense?). The Wookiees are then free to celebrate Life Day in front of the Tree of Life, but, like, Kashyyyk is still under military occupation by a fascist regime so how cheerful are you actually feeling right now?

I tend to be a big fan of things that shouldn’t exist, and The Star Wars Holiday Special clearly shouldn’t exist. It’s the product of dozens of poor decision made by everyone involved and I sincerely love every incorrect second of it. Star Wars has become such an entrenched, concrete thing that it’s really wonderful to go back to these early days when everything was fluid and nothing was set in stone. Say what you will about the prequels, but Lucas learned his lesson from this and decided to never again let someone else play in his sandbox without clear oversight and supervision. Even now in the post-Lucas era of Lucasfilm, he hand picked his successor to be someone he knew would respect and protect his vision (which is ultimately the real reason why the original versions of Star Wars will not be released for the foreseeable future). That decision is unquestionably best from a brand perspective, and it’s allowed for some genuinely terrific additions to the series (The Last Jedi is the best Star Wars movie. Never, ever @ me), but I’m truly thankful that in this one moment, while the grownups were busy making Empire, someone was handed the reigns of the first followup to the most successful movie up to that point and promptly steered the thing right into crazy town.

Post Script: On this fortieth Life Day, I would like to take this opportunity to unveil a personal project I’m going to be working on for the next year. In 2019 I am endeavoring to watch every canonical Star Wars film and television episode, in chronological order, leading up to the December 20 release of Episode IX. That means all eleven movies, of course, but also all 130 episodes of The Clone Wars, 75 episodes of Rebels, 22 episodes of Resistance, and maybe I’ll burn through the campaign of Battlefront II again for good measure. I’ll be writing reviews and reappraisals as I go, all of which you’ll be able to find right here (or, hey, if you’re an editor of a website and want to pay me to do this nonsense for you, feel free to slide into my DMs).

I’ve been wanting to revisit The Clone Wars in order to give it another shot, and after Lucasfilm published the chronological viewing order for that series, this whole idea sort of spiraled out from there. In the remaining weeks of this year, I’m also going to be digging into the television projects that were jettisoned from the current canon (Legends, if you’re nasty), some of which I’ve never before seen; this piece is actually a backdoor pilot for that series!

Next up are the made-for-television Ewok movies, so keep an eye out for that, and come back the second week of January for the first installment of…

2 thoughts on “THE STAR WARS HOLIDAY SPECIAL At 40”