This is it. In terms of timeline, this is the lynchpin of the whole Marvel Cinematic Universe, and it’s the reason why everyone got in a tizzy over the version of the timeline as presented by Spider-Man: Homecoming. The crucial question is when does this movie take place? Is it 2009 or 2012? If it’s 2009, that means that the timeline established by Iron Man and The Incredible Hulk is true, if it’s 2012, that means the entirety of Phase One (Captain America: The First Avenger notwithstanding) is moved forward by as much as three years. So, where does the movie itself land on this issue?

Rule #1: Only the movies are canon.

Rule #3: References to dates in spoken dialogue are always true unless they conflict with rule #2.

Rule #4: Written dates that are prominently displayed in the world are usually true, unless they disagree with rules 2, 3, or each other.

Rule #5: Props and background objects that can be tied to a specific date almost never count. Aside from a brief reference to time at the beginning of the film, the first real bit of information we get about the temporal setting of this movie is when Black Widow goes to recruit Bruce Banner. She tells Bruce it’s been more than a year since his last incident, and there are a couple ways we can interpret that. The last incident we’re privy to, at the very end of The Incredible Hulk, happened about one month after the fight in Harlem, or right around July 15, 2008. It’s possible, though, that S.H.I.E.L.D. wasn’t aware of that incident as the implication is that Bruce is starting to figure out how to keep it under control, which would push the “last incident” back to the Harlem fight in mid-June. Either way, if it’s been more than a year, that puts us somewhere around July of 2009 at the absolute earliest.

Here we have Steve saying that he “slept” for 70 years, referring to his time frozen in ice. In this case, 70 years is almost certainly a rough estimate, because if we assume Steve went under in 1944, exactly 70 years later would be 2014 and we’re not even going to entertain the notion that this movie was set in the then-future. Whether it’s been 65 years or 68 eight years, both round up to be about 70.

The other thing to talk about here is how long, exactly, has Steve been out of the ice? The movie never says specifically, but the way this conversation with Nick Fury is presented, I think it’s a safe assumption that Steve’s only been out in the world for a very short amount of time. Certainly no more than a few months, but maybe even as a short as a few weeks.

This is my favorite thing, and if Marvel had better foresight, this is the kind of thing they would have done all along. Here we have a dated S.H.I.E.L.D. document, but the date field is left empty. Perfect! Take the sliding timeline idea from the comics and don’t put dates on anything unless it’s explicitly necessary for the purposes of the story.

But, we’re not quite that lucky. In the files Tony is given on the Avengers Initiative, there’s one date very clearly displayed: archival footage of one of Captain America’s missions labeled “11.43” or November, 1943, which lines up with what we saw in his movie. What complicates matters, though, is that same labeling convention is applied to an image of Loki, and – though blurry and backwards – it seems to say 10/12. That would put this in October of 2012, which doesn’t make a ton of sense, but let’s go along with this for now.

On the Helicarrier, we get another S.H.I.E.L.D. computer screen with another date, only this one is wildly different than the one we just saw. This one reads, “02.12.2012” which either puts this in February or December of 2012, depending on which standard they’re using, and neither of which are October.

And then, just to complicate it further, we have the German exhibit that Loki crashes with banners out front advertising the event lasting from May 4 through October 21. The first date we’re given just squeaks in under the line, but the more recent date, no matter how you choose to read it, misses the event on both ends. Oops. 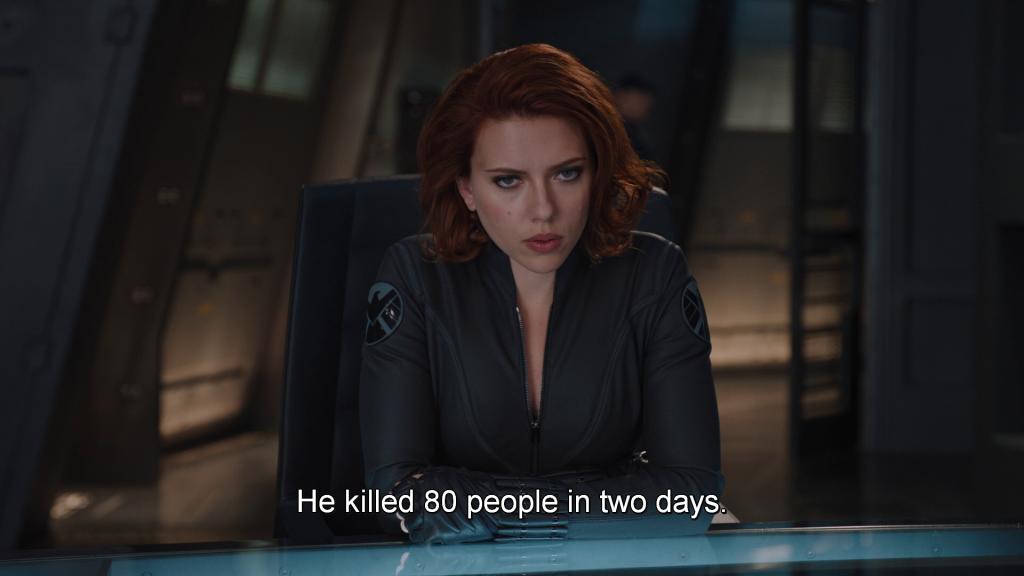 These ones don’t do much to establish The Avengers position in the broader chronology, but it does firm up the internal timeline of the film. Everything in this movie happens over the course of two or three days rather than weeks or even years like previous films.

Outside of Natasha’s comment about Banner’s last incident, which is open to some amount of interpretation, this is the only definitive spoken reference to The Avengers‘ place on the timeline relative to the other films. Whenever The Avengers takes place, we know it’s only one year removed from the events of Thor and, by association, Iron Man 2.

And here is yet another piece of background information that puts this in 2012, while simultaneously disagreeing with every other date we’ve seen.

So here’s the problem. If we go back to our rules, outside of Captain America: The First Avenger, none of the films feature title cards establishing when the action of their movies takes place beyond vague references to events that are not set in stone (i.e. the “6 months later” in Iron Man 2, or the “Days without incident” in The Incredible Hulk. So that removes rule number two.

Rule number three, has a similar problem. No one say out loud what year it is, they only reference the date relative to events of other movies.

So that’s leaves us with rule number four, and of the six movies in Phase One, four present three completely different possible timelines. The Avengers assumes it is taking place in 2012, but can’t ever decide when in 2012 it’s taking place; Iron Man 2 mostly sticks with May of 2010, but there are plenty of inconsistencies present; while both Iron Man and The Incredible Hulk agree that those movies take place in the summer of 2008. Unfortunately, all three of these cannot be true since Iron Man 2 happens only six months after Iron Man, and The Avengers only a year after that. So which movie do we believe?

My take is that the films that are the most internally consistent are the ones we should consider to be the most true. That might be controversial, but that’s been baked into the rules I laid out from the very beginning. “Written dates that are prominently displayed in the world are usually true, unless they disagree with rules 2, 3, or each other.” Not only are Iron Man and The Incredible Hulk both completely internally consistent, they’re also consistent with each other, which isn’t true of basically any of these movies so far.

So, using those two movies as our benchmark for everything else, here is…

The Timeline So Far…

2 thoughts on “The Unofficial MCU Timeline, Part 6 – THE AVENGERS”