When discussing the Walt Disney Studios live action presentation at the 2015 D23 Expo, I described it as “something of a mess.” Well, if that’s true than the Disney Parks & Resorts presentation held a mere two-and-a-half hours later was more or less a garbage fire.

As I alluded to when discussing the Star Wars Land announcement in my previous article, it’s clear that something very wrong happened behind the scenes right at the last minute, and the people running the Parks & Resorts presentation were completely unable to recover. Having already had their big, headline grabbing announcement stolen out from under them, they had no choice but to lead the panel with it. What’s worse is that despite Iger’s claim that more details would be announced during the Parks presentation, a visibly flustered team read verbatim the same exact script Iger had already gone through earlier that day. Yes, Star Wars Land still looks super-duper cool, but it was dumbfounding to have them make the same announcement twice without providing any additional details or context.

But hey, that was obviously an eleventh hour change, and as long as the rest of the presentation was worthwhile everything would be fine, right?

After reciting the Star Wars Land announcement (which conspicuously comes without a target opening date), Disney launched into their more immediate plans for this series. Boy oh boy, I’m still reeling from this whiplash. First up, they announced that the Star Wars Launch Bay preview center would be coming to Disneyland and Disney’s Hollywood Studios later this year, because hastily thrown together marketing overlays of Innoventions and The Magic of Disney Animation are certainly not an enormous buzz kill after the concept art we got of Star Wars Land. They also announced that the popular Star Wars Weekends event in Orlando would be extended and rebranded as “Star Wars: Season of the Force.” The event will also be coming to Disneyland and will coincide with a new Star Wars-themed overlay of Space Mountain called – yes, I’m being serious – Hyperspace Mountain. On top of that Star Tours will be getting a new Sequel Trilogy-centric sequence (making the attraction even more of a hodgepodge nightmare) and the “Jedi Training Academy” will be getting some characters from Star Wars Rebels (presumably the Inquisitor).

Taken on its own, none of this is particularly egregious. Disney’s been doing this kind of shameless tie-in marketing for decades now, and as a big dumb fan of Star Wars I’ll probably even be into some of it, but, Jesus, you can’t promise filet mignon and then expect people to be satisfied with microwave White Castle burgers in the meantime.

What is much more egregious, however, is the other expansion they announced for Disney’s Hollywood Studios. You would think that with the way Star Wars Land is raising the bar, any other additions to that park would need to step up their game in order to compete, right? Silly you, why would Disney hold themselves to a consistent level of quality when they can just do a spit-shine on the horrible, lazy Toy Story Playland that’s already infected two of their international parks?

Toy Story Playland – here called simply Toy Story Land – is a collection of off-the-shelf flat rides with some half-hearted Toy Story theming. It’s something very much like A Bug’s Land in Disney’s California Adventure and has little value beyond being an easy way to pad out the number of attractions the park has to offer. To be fair, the version of this they’re doing for Hollywood Studios does appear to be a step up from the versions in Hong Kong and Paris, but the comparisons made by Disney to Cars Land are disingenuous in the extreme. Sure, Cars Land is similarly light on strong content, but it’s anchored by a really solid E-ticket and some extremely impressive environmental design. Toy Story Land appears to be lacking both those things. You have a Little Green Men re-skin of Mater’s Junkyard Jamboree, a Slinky Dog kiddie-coaster, and a pre-existing video game ride that, although popular, is ultimately just as thematically lazy as every other part of this area appears to be. Looking at the concept art, there doesn’t seem to be anything that acts as a strong visual anchor for the land, it doesn’t appear to be a particularly interesting environment, and it lacks a real signature attraction. If Star Wars Land represents the best of what Disney has to offer in their parks, then it’s a tragic irony that Hollywood Studios will also be getting the worst Disney has to offer with Toy Story Land. 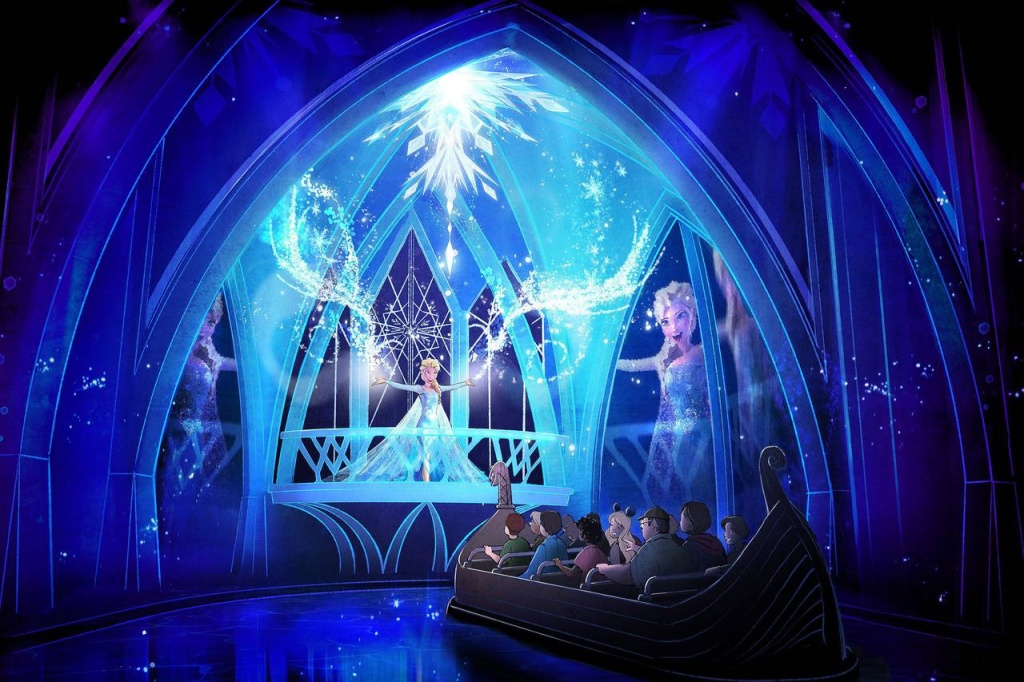 Speaking of creative bankruptcy, I guess we should talk about Frozen Ever After. Honestly, there’s not much to say about this one that hasn’t already been said. The most successful animated film of all time is getting a crummy rush-job overlay of a 30 year old, low capacity boat ride, replacing one of the very few rides in a park that has endless amounts of expansion space. Frozen should have gotten a full-blown mini-land at either Magic Kingdom or Hollywood Studios. Failing that, it should have *at least* gotten an attraction built from the ground up in one of the two massive expansion pads that lie on either side of the Norway pavilion in Epcot. None of that matters, though, because Disney wanted a Frozen ride done fast instead of done right. At least no one clapped for it.

Moving on to some better news, Imagineer Joe Rohde, James Cameron, and Jon Landau took the stage to talk about Pandora – The World of Avatar for Disney’s Animal Kingdom. This is a project I’ve been down on basically from the moment it was announced, but now that we’re finally getting some concrete details on it, it looks like they’ve managed to make the best possible version of a bad idea. Rohde is no slouch and the attention to detail he brought to the rest of Animal Kingdom seems to be used to great effect here. It certainly looks gorgeous with waterfalls cascading to the ground from mountains “floating” overhead. Rohde also went out of his way to distance the theme park land from the plot of the movie, saying, “it’s the world of Avatar, but it’s your story.” Still, as beautiful as this looks, there’s very little of it that actually excites me or sticks in my head, so kudos to them on really capturing the feeling of watching the film.

After Avatar, the presentation very quickly hit some highlights in Paris and Tokyo before stopping in Hong Kong to talk about the first Disney attraction based on Marvel characters: Iron Man Experience. Hoo boy, what a doozy. This ride looks terrible! Based on this, it’s no wonder that Marvel is rumored to be on the outs with Imagineering, instead turning to Universal Creative to develop new attractions for Islands of Adventure. The ride itself is a Star Tours clone, the premise of which is that you’re involved in a demo of a new Stark Industries armored transport when – surprise! – HYDRA attacks and everything goes awry! They showed some brief footage from the on-ride film, and it was abysmal, looking like an early 2000s on-rails shoot-em-up game than anything even approaching the kind of action we’re treated to in the Marvel movies. Not even a surprise appearance from Smilin’ Stan Lee himself could make this reveal any more palatable.

That was pretty much the end of it for the presentation. They spent some time going over the details of Shanghai Disneyland, but it was all information that’s been released for weeks now. The final announcement was that the new ride film, Soarin’ Around the World, from Shanghai will be coming to Epcot and Disney’s California Adventure next year, just so we could get one last piece of bad news* before the whole thing closed out. What a goddamn bummer.

Again, something obviously went very wrong here. The audience – who were totally unengaged and bordered on being hostile after only a few minutes – probably would have been much more onboard if they weren’t judging everything against the high bar set by Star Wars Land before the presentation even began. In a way, though, I’m kind of glad Disney bungled this presentation so badly because it shows that we know what they’re capable of doing when they really give a damn, and we’re not going to be happy with second-rate crap in the interim. I realize that’s a naive perspective, and that Toy Story Land will probably be an enormous hit because there’s nothing else to do in that silly park, but I really, desperately hope the winds change. I was gobsmacked by the Star Wars Land announcement, and it shows exactly the kind of ambition and daring that I’ve been wanting to see from Disney for years. I want to see cool, new, exciting things that have never been done before – things that really challenge our understanding of what can and cannot be done in a theme park setting. I saw that in the Star Wars Land announcement, which makes it an unbelievable shame that the entire Parks & Resorts presentation was essentially a waste of time.

*Bringing this film to Epcot is an unquestionably good thing, and it’s frankly a decision that’s eleven years overdue, but Disney California Adventure should probably keep the film that centers on California.

5 thoughts on “D23: The Unmitigated Disaster of the Disney Parks & Resorts Presentation”